skip to main | skip to sidebar

Movies in a Minute: Jurassic Park II: The Lost World

Hey, you guys. I know I posted the Lost World before, but I've re-edited it so I'm happier with it. Expect some totally brand new posts after Thanksgiving break.

John Hammond: "I'm a conservationist now. I've sent your beloved paleontologist girlfriend off to Isla Sorna to scout all the lovely dinosaurs. And I knew you'd go after her. Isn't that delightful?"

Ian: "You're lucky you're so damned cute."

John: "You'd better hurry. My nephew Peter Ludlow, the new head of InGen, is planning on making a tacky dinosaur amusement park. And he won't even give me half an acre for my performing fleas. Go and stop him."
Kelly: "Dad, can I go with you, Dad? Dad?"

Ian: "How many Sarahs do you think are on this island?" 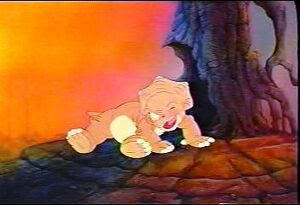 Cera: "Does anyone know how to get to the Great Valley?" 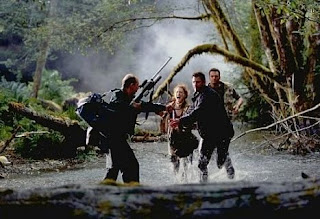 Sarah: "Help, I need guns and tampons and chauvinism and some Cherry Garcia!"

Feminism: "Could someone loan me a pair of crutches?"

Sarah: "Anyway, as I was saying, we're here to observe, not interact. Anything we do could have lasting repercussions. Not even a single candy wrapper can sully the island."

Sarah: "She's a woman, Ian, not a child. I'm so tired of you treating us women like we're brainless, hysterical little damsels in distress. Anyway, Ian, this is really your own fault. You filled our heads with stories of this place. Did you really think we had the self control to stay away? Sorry, I love you but I don't need you right now. I'm off to finish my dissertation on baby dinosaurs." 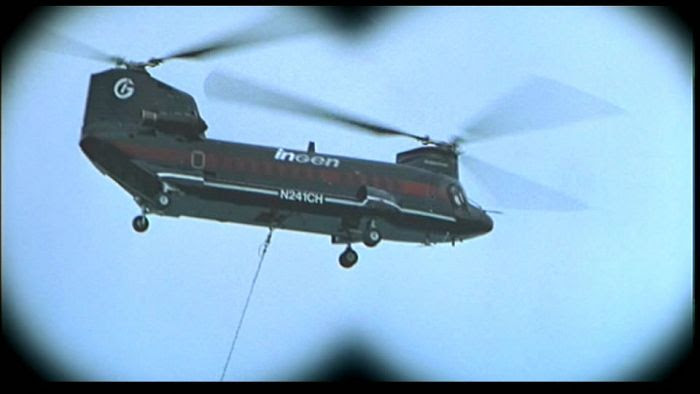 Dieter Stark: "Look at it. It's like he's not even afraid."

Hippie Beardo: "They've got no reason to fear man."

Sadako: "Dieter? This is a Spielberg film and you just 86ed an animal. You do know your chances of making it out alive are less than your chances were of actually getting Steve Buscemi through that woodchipper back in North Dakota, yes?"

Roland: "I've set up base camp. You can keep my fee, you corporate wanker. All I want is the right to hunt the Rex. Look, Ajay. The Rex young. With offspring that young, the parents won't leave him alone that long. We can use the baby to get him where we want him to go."

Sarah: "Or her. Female Rexes are just as worthy of capture!" 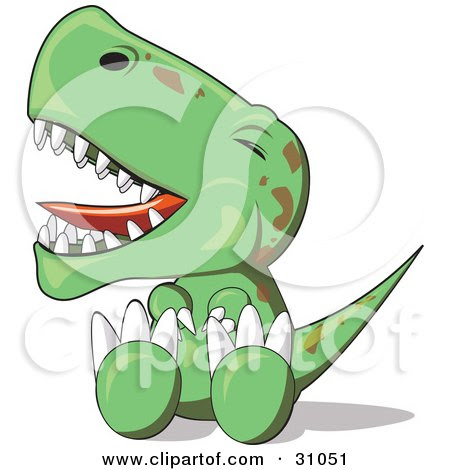 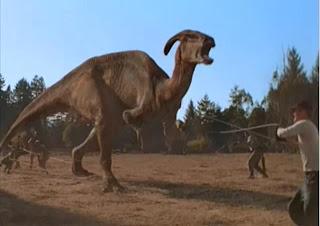 Nick: "John Hammond did send a back up plan. Me."

Nick: "Star in as many crappy features as possible until Will Ferrell realizes I'm the greatest thing since Spam in a Can. Oh, and free the dinosaurs that they penned up!"

Nick: "Well, we've destroyed all of INGEN's evil corporate radios and phones by unleashing a dinosaur stampede. But we've still got the expensive trailers we came with to dispense with. Time for operation save cute baby! Come on, baby Rex."

Sadako: "Nick. The bad news? This isn't going to end well. The good news is that if you make it out of here alive, the good people at Whale Wars have a mid level stinky butter hurling position to offer you." 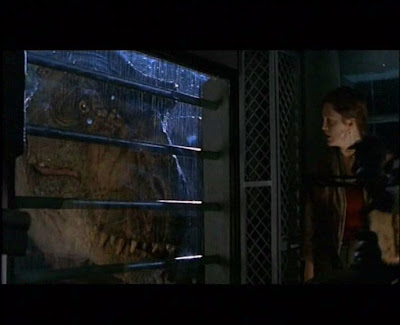 Ian: "That should make an interesting chapter in your book."

Sarah: "I think the debate over the parental instincts of the T-Rex is now academic. Now, the only question is what to put on the cover. Baby Long Neck or Baby Three Horn?"

Rex: "...Psych. We're back. A dinosaur's story of revenge. Come on, honey, help me push the RVs over the side."

Eddie Carr: "Eddie to the rescue!" 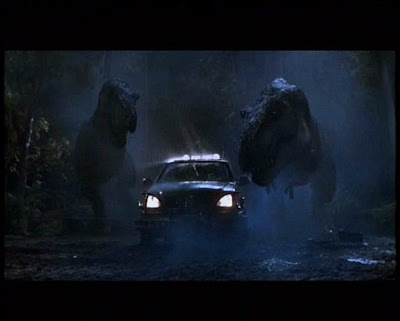 Eddie: "Wait, wait. I operated according to the rules of the Spielberg-a-verse. I saved the heroes. I allied with the Greenpeace guys. I don't have a law degree. I didn't steal embryos, and I didn't shoot the cute herbivorous stegs when they were attacking Sarah Harding because they were just defending their baby. I didn't even fantasize about Sarah in nothing but a smile and a flak jacket."

Spielberg: "You saw the first film, you balding, overweight tech geek. You know the rules. I really don't think this is quite the film for a man of your...carriage. If you go quietly, I'll leave twenty pounds of free gummy dinosaurs in your trailer."
*Trailers fall off the cliff and explode*

George Lucas: "Steve, was that as good for you as it was for me?"

Roland: "I know you. You're that Earth First bastard. Thanks to your eco terrorism, we're stranded here."

Nick: "Well, thanks to me we're also one step closer to Dinotopia."

Sarah: "You're wrong. T-Rex has the largest nasal cavity of any animal with the exception of one. Now hand me my blood covered vest and let's get on with it."

Roland: "Are you injured? Your jacket...it's covered in blood."

Sarah: "And it's torn, from caring for the baby Rex--I think the blood gives it that little something extra, doncha think?"

Sadako: "Told you. Be nice to little animals when you're co-starring in a film that is PETA's wet dream."

Roland: "Now to take down the male Rex. Damn, where are my bullets?"

Nick: "Replaced by yours truly."

Spielberg: "My man! With what? Walkie talkies?"

Roland: "Fine, fine. Tranquilizers it is."

Spielberg: "Hm, for no other reason at all...send in the raptors." Ian: "You got cut from the team? And they say there's such a thing as affirmative action!"

Spielberg: "Okay, raptors, the rest of you are disheartened and confused now that Shaniqua Lou Retton killed your friend. Start fighting amongst each other randomly and ignore the fleshbags."

Sadako: "WHAT? They're stupid AND weak? These are not the raptors I'm looking for!"

Peter Ludlow: "Good news, everyone! The Rex is tranquilized and help is here. We'll bring Rex and baby Rex to San Diego via ship."

Sadako: "Am I the only one who saw Reptar on Ice? This isn't gonna end well." 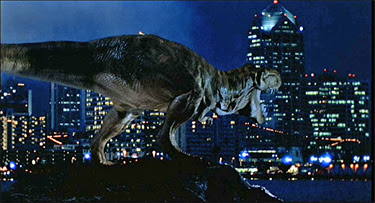 T Rex: "San Diego, eh? Time to hunt down a My daddy went to San Diego and all he got me was this stupid t-shirt for Rexie. I need a large in the torso and an extra extra small in the arms."

Sadako: "Back up a teensy bit. You know, the part where the crew was all dead and eaten and yet the T-Rex was still in the closed cargo hold?"

Spielberg: "That's the last time I leave you in charge of anything related to plot, Lucas."
T-Rex: "Progress and technology angers me! Time to kill a corporate head. Come on, Rexie, just like Daddy showed you."
Rexie: "Yum! Can we stop off for some Enron on the way home, Daddy?"

Spielberg: "Time to return Rex and baby Rex home to Isla Sorna. Cue the thoughtful music and the shots of cute dinosaurs romping on the island." 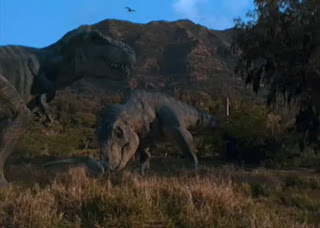 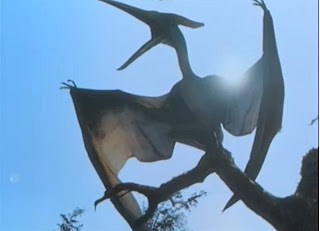 John: "You see, it's much more profitable to simply film nature videos of the dinosaurs in their natural habitat, just being dinosaurs, and then have my brother narrate over them in a calm soothing tone of voice. We'll make a mint!"
Posted by Sadako at 12:00 PM

Sadako
Snarking my way through every facet of today's pop culture. Got a tip, comment, or just want to say hi? E-Mail me at dibblyfresh1[at]gmail.com